We’ve created a list of things to see and do in Irkutsk based on our own experience. We went to Irkutsk knowing that it was seen as the entrance to Lake Baikal, but we left thinking that Irkutsk was more of a gem than Baikal itself. So, here are our best things things to do in Irkutsk (in order):

There are many churches around Irkutsk and you will see their gold rooves as you walk around the city. Most churches date from a few hundred years ago and are often replacements of older timber churches on the same site. Make sure you enter the churches, as the interiors can be stunning too. If you are female, it is useful to bring something to cover your head so that you’re allowed in. However, if you don’t have anything, many churches will have head coverings in a basket that you can use for free.  We selected six of the best that we saw below.

Sarah’s favourite, and undeniably beautiful. This church is a little further out, but worth the walk. 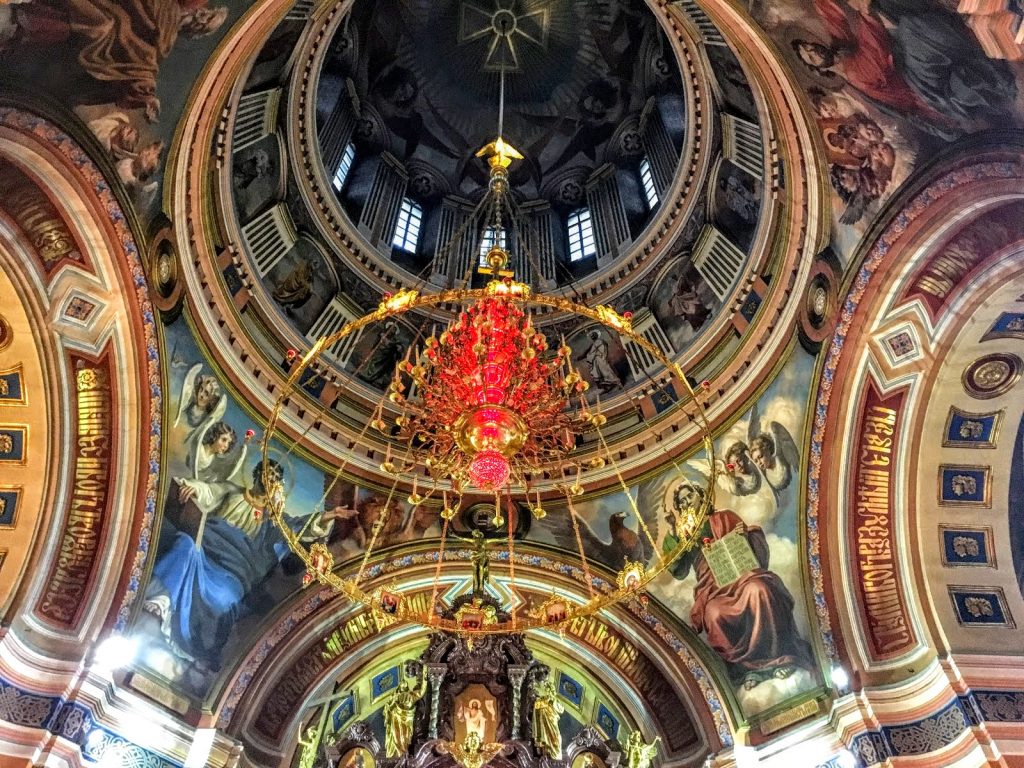 Random: When we visited, some locals tried drifting round a corner, span out of control and nearly knocked us out. Hopefully, this doesn’t happen to you too.

This one is right by the river and absolutely stunning inside. A must see. 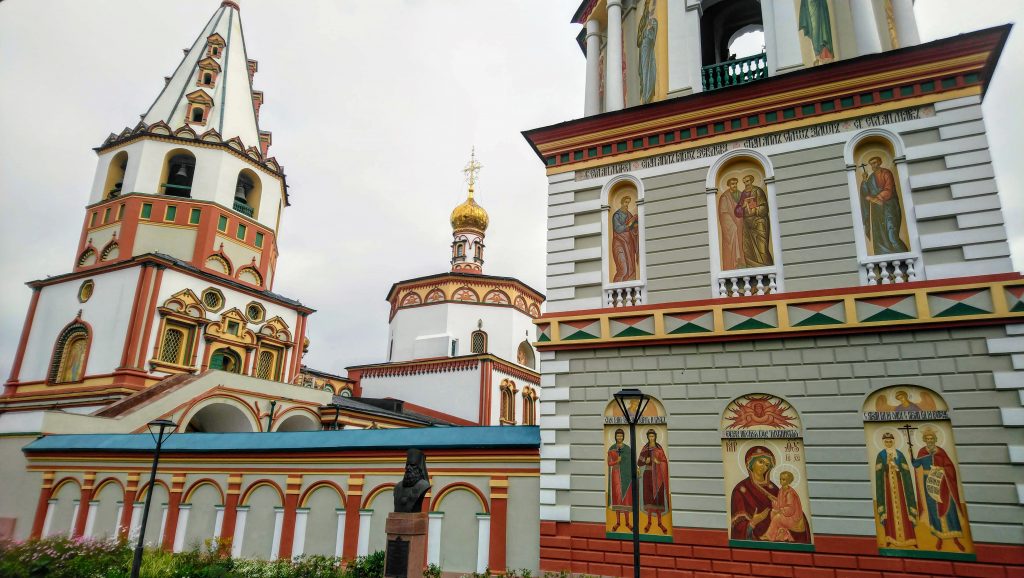 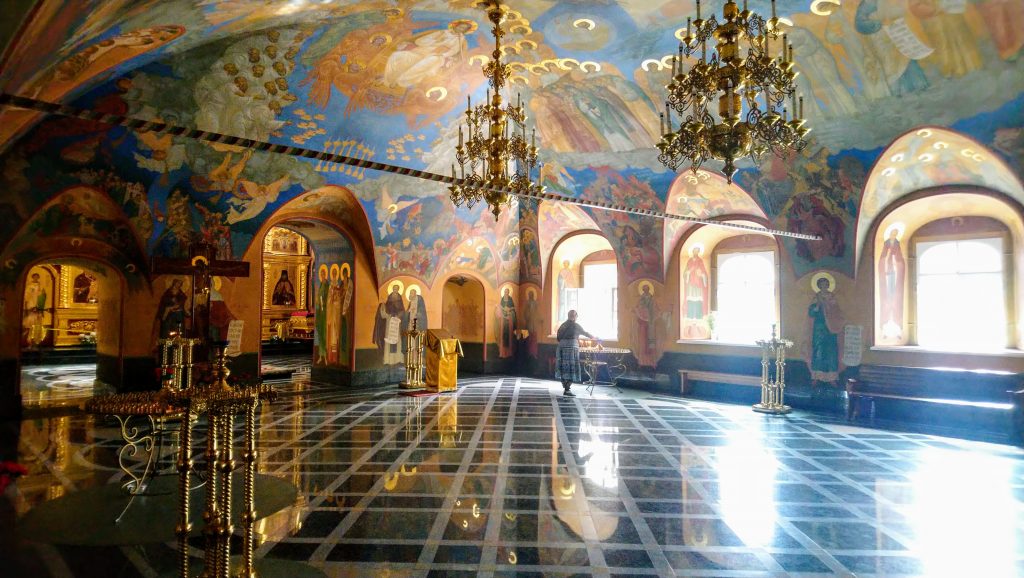 Conveniently between Epiphany Church and the main square. 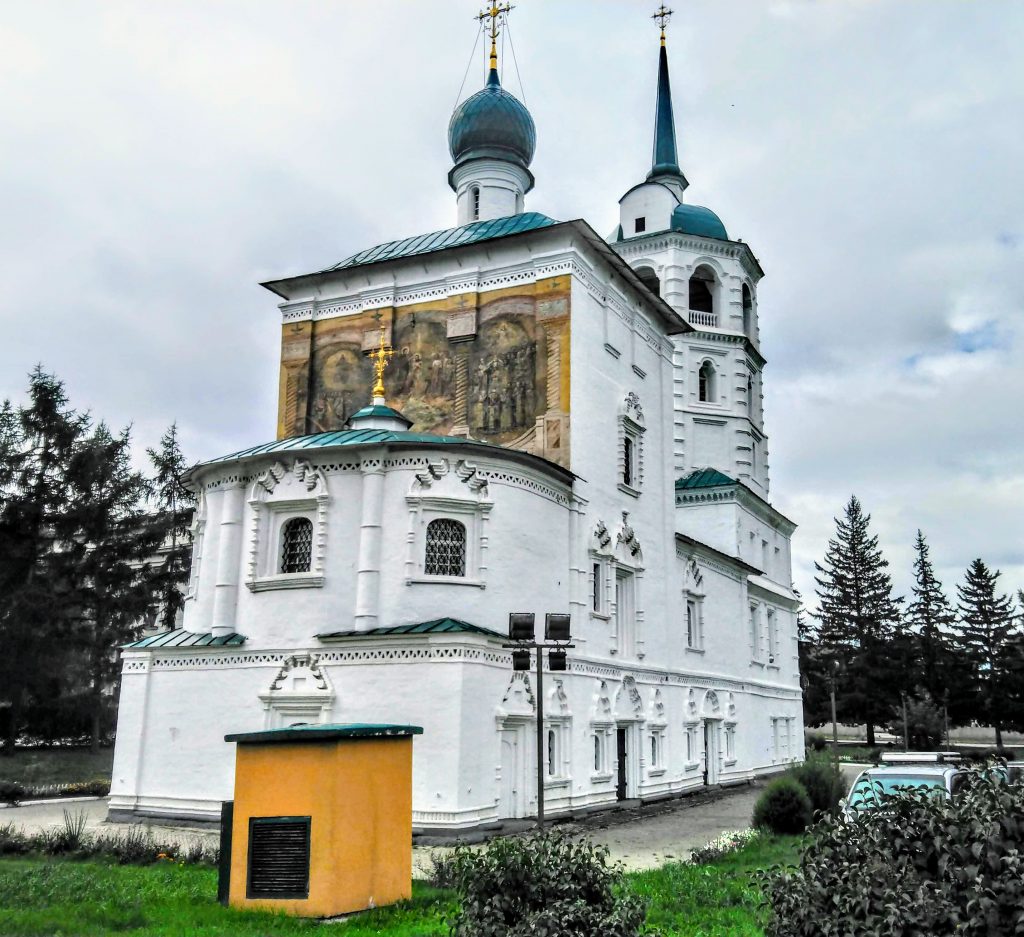 Not worth going too far out your way for if you’re seeing the others, but a nice church nonetheless. You might pass it if you’re following the city walking route. 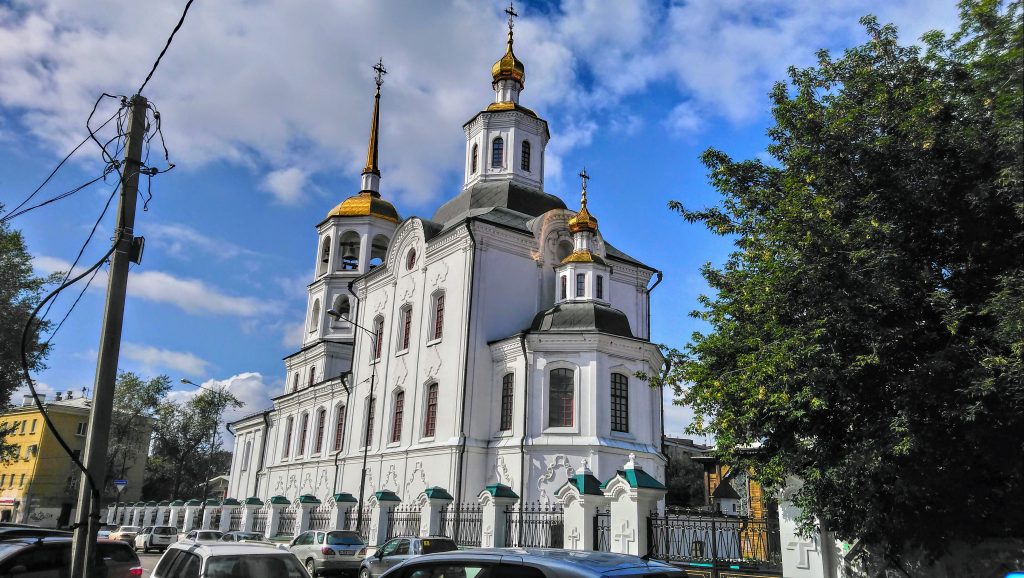 Beautiful inside and out, this church is surrounded by flower gardens and will be passed by any tourist visiting 130th district (mentioned later). 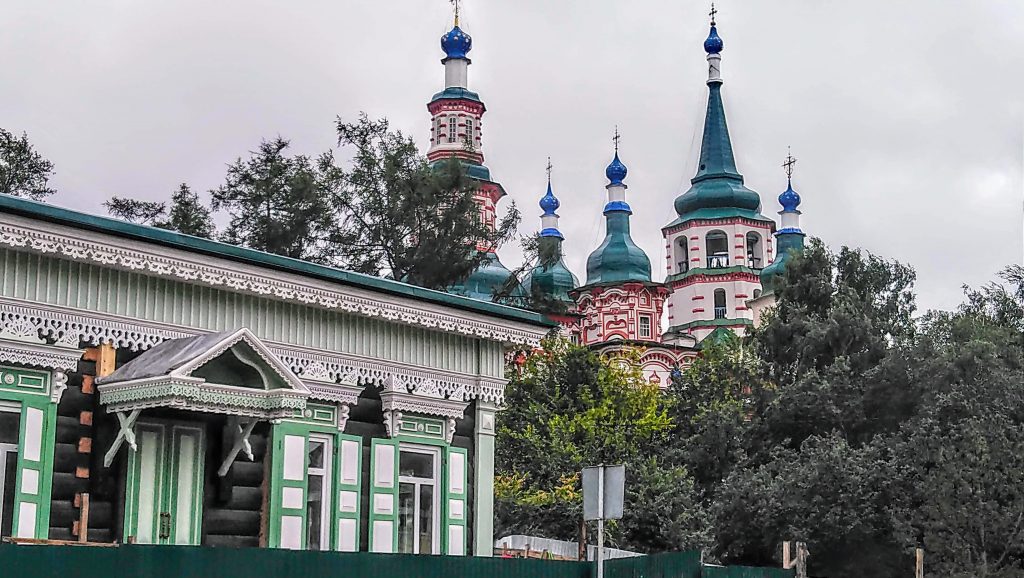 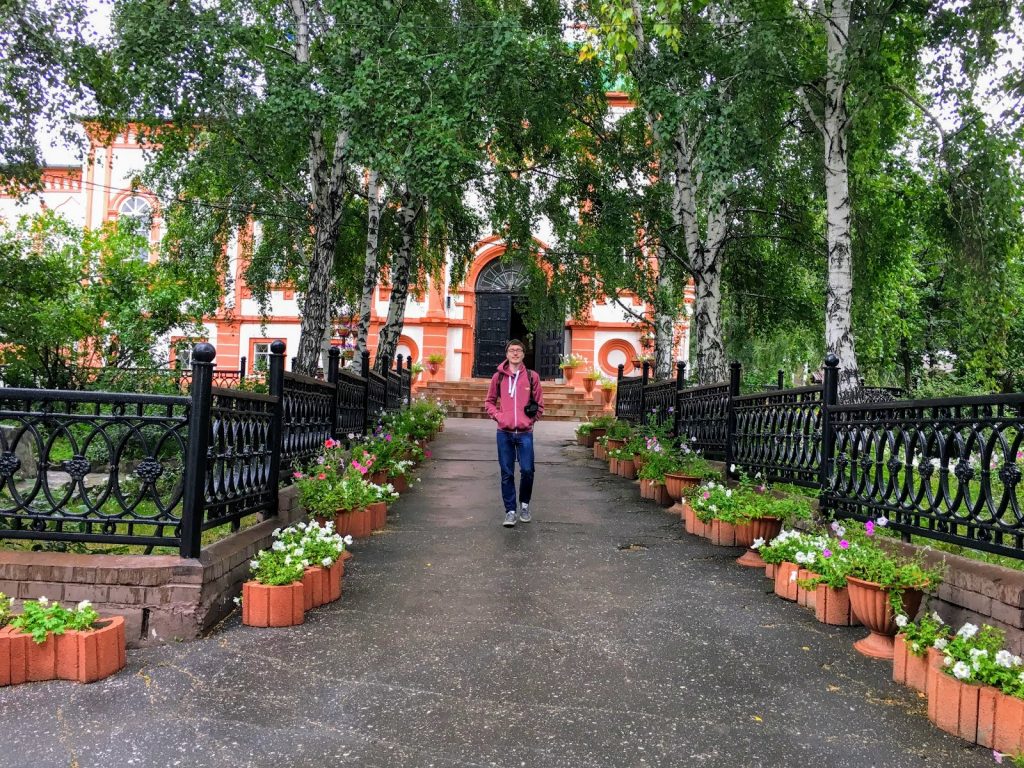 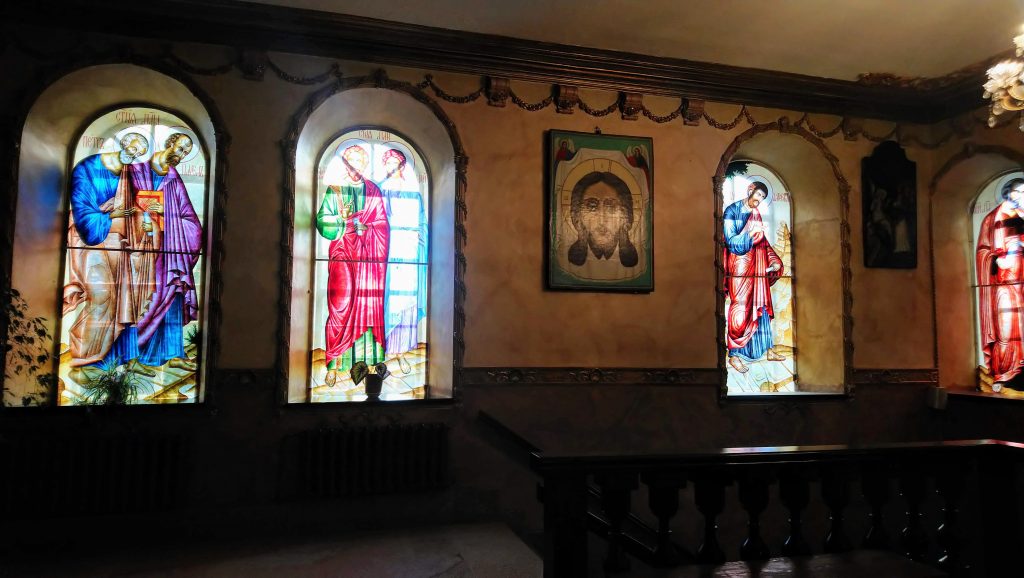 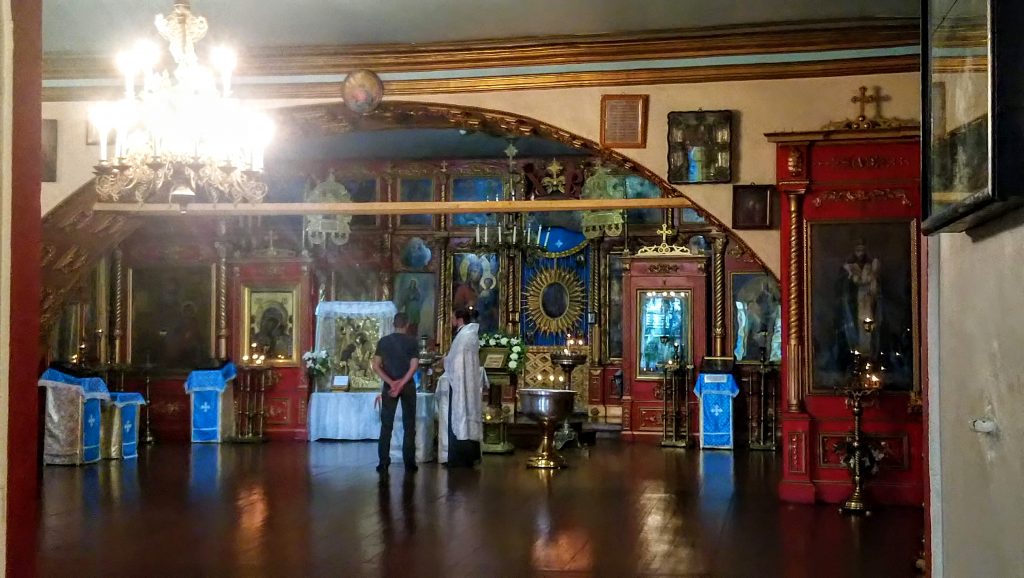 The Entry Into Jerusalem Church

One of the smaller churches on this list, this church is atop the flight of steps going to Central Park. The park itself was disappointing, but the amount of construction we saw suggests that they may be making serious improvements to the park. 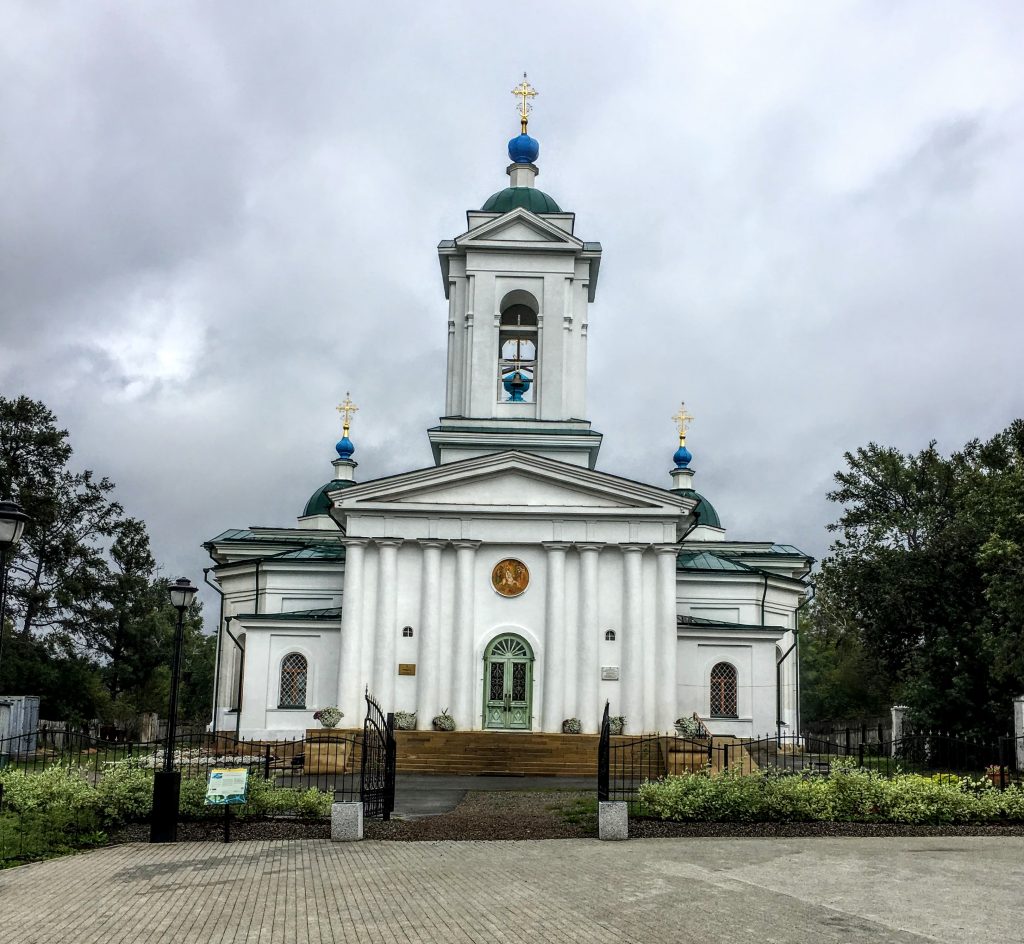 The central market is sizeable and the biggest we saw in all of Siberia. This means that you’ve got a better chance of finding strange food or distinctively Russian hats here than in any other place.

The old wooden houses are everywhere. We visited the 130th district, where houses were restored and moved to provide a collection of wooden houses all in one place, but we suggest just walking around town to see unmarked gems like these: 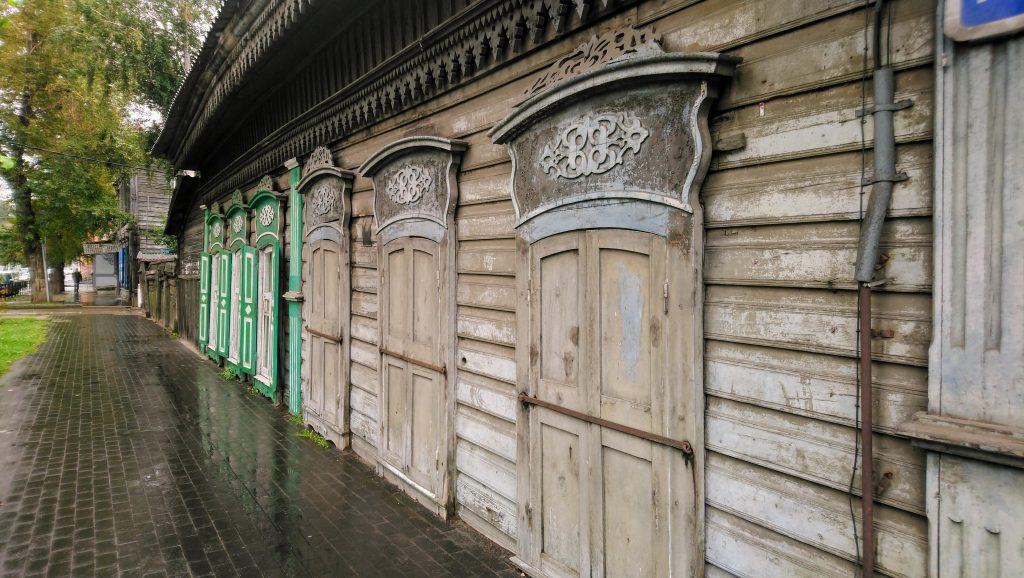 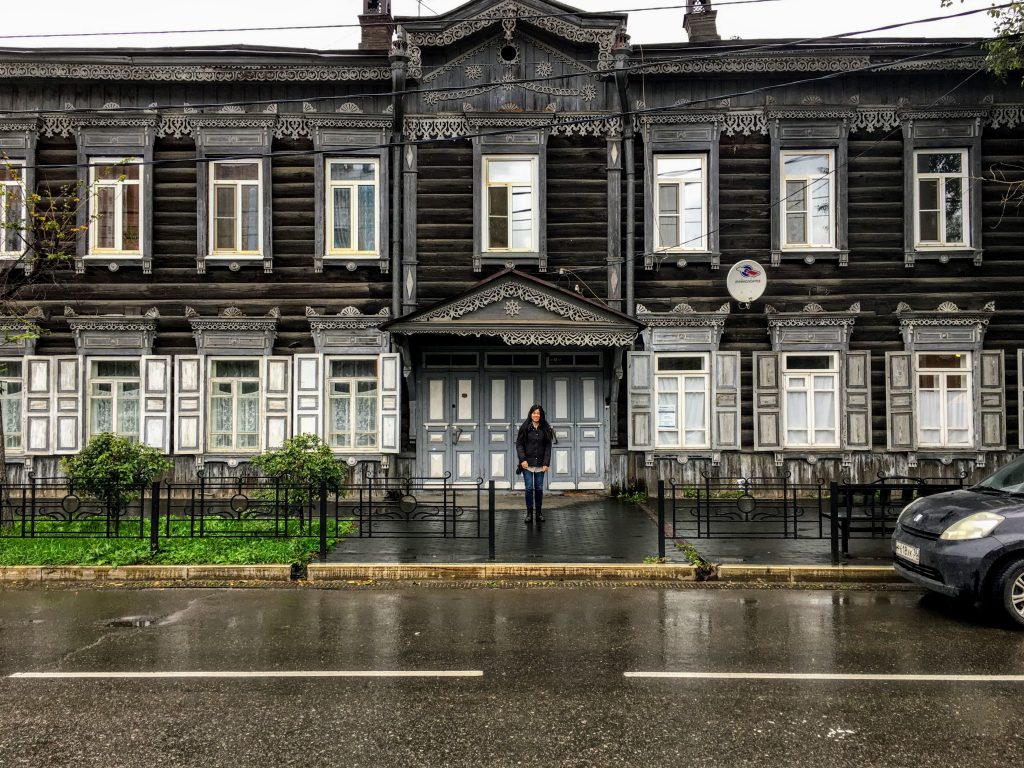 Communist and formerly communist nations seem to have a strange fascination with monuments. Russia is no exception, so when in Irkutsk you can feast your eyes on monuments like these:

In almost every city we’ve been to in Russia, there’s a huge statue of Lenin (even if it’s just a head in Ulan Ude). That’s an impressive achievement for the man considering the official line of the government says that Lenin was a negative influence on Russia. If you missed the Lenin statues in every other city in Russia, you can find this beauty in Irkutsk:

Monument to the Founders of Irkutsk

We all hate tax, but it does have some benefits, such as hospitals, schools and the founding of Irkutsk. Yes, that’s right, some Cossacks went East to collect some tax and ended up needing to stay for the winter. The result? Irkutsk was born! The statue represents a general stereotype of a Cossack, who were a military group favoured by the Russian royal family pre-revolution. 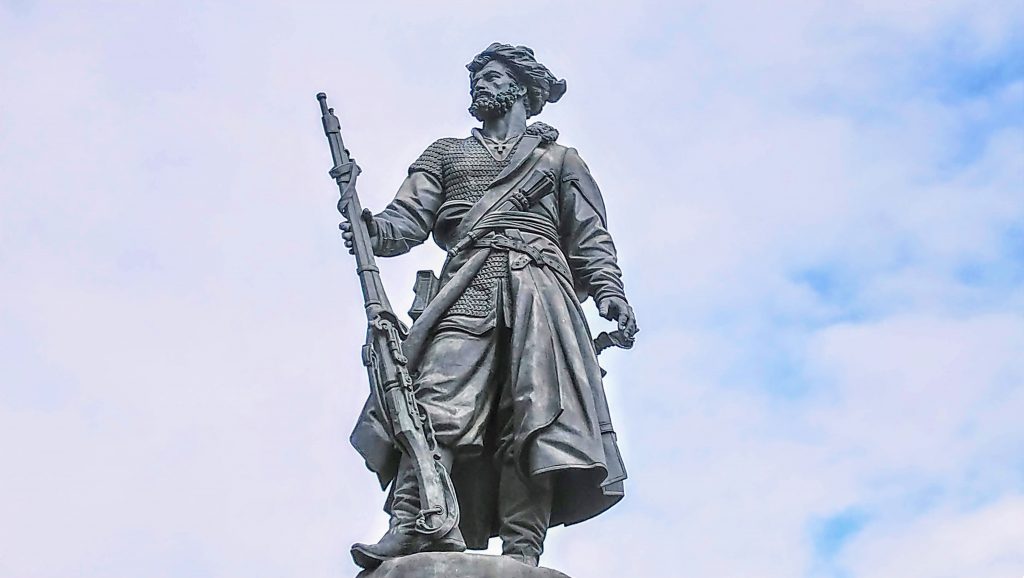 Despite being over 5,000 km away, the creators of the arch decided that this arch be called the Moscow Triumphal Arch. It’s the most beautiful and most poorly named arch in the city, although I did hear that the street it was originally on would be translated as ‘Moscow Street’, which makes the naming forgivable. It was originally made to commemorate Alexander I, but was dismantled when it fell into disrepair in the 1920s. Jealous of London, Paris and countless other cities with needless arches, Irkutsk rebuilt their arch in 2009 and is now back on the map for arch enthusiasts. 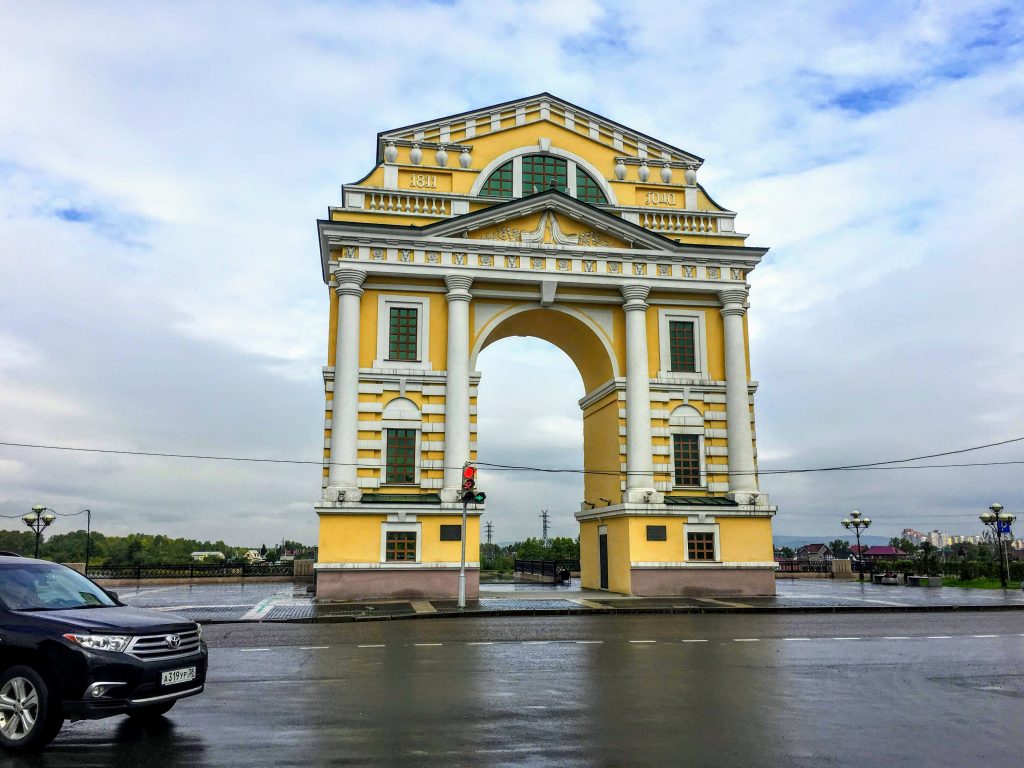 The World Wars were brutal and many men (and women) were lost. The USSR had a disproportionately high number of victims (13.7% of the population) and this eternal flame is dedicated to men and women lost who originated from Irkutsk. 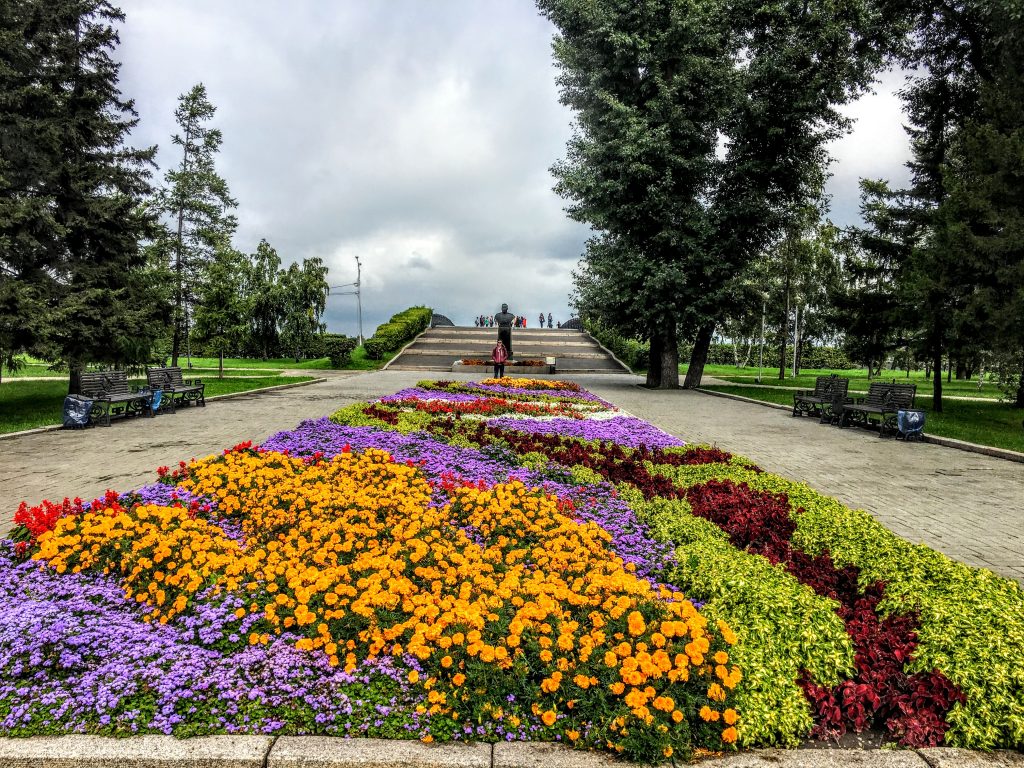 Siberia has a distinct branch of Russian cuisine that’s worth trying. Expect a lot of pine nuts, berries, cherries and fish.When in Irkutsk or Ulan Ude, you can also try Buryat cuisine, which is the food of indigenous people from the region.

A fish unique to Lake Baikal. If you don’t try it here or nearer the lake, you won’t ever try it. Eat it smoked, dried or salted.

The refreshing lingonberry is everywhere in Siberian cuisine. You can see it as a juice (cowberry juice is also very common and is the same thing), have it as the main ingredient in your tea Lingonberry Tea, have it on ice cream or have them in a traditional Siberian dessert with honey and pine nuts. 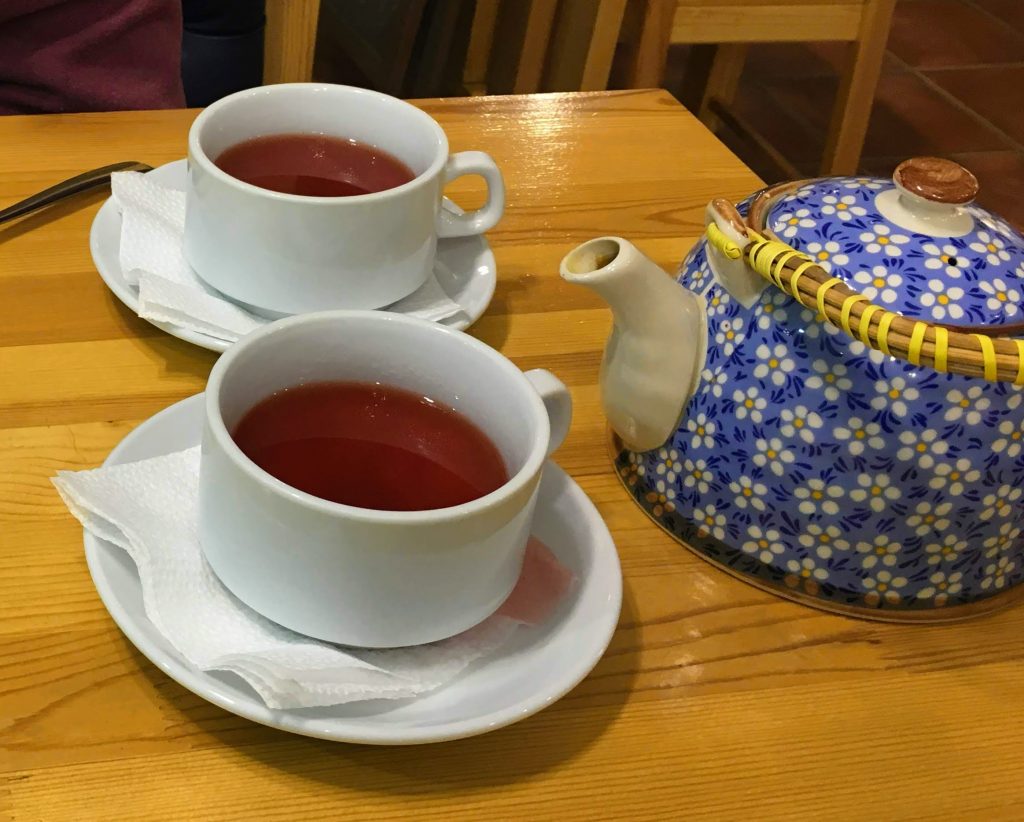 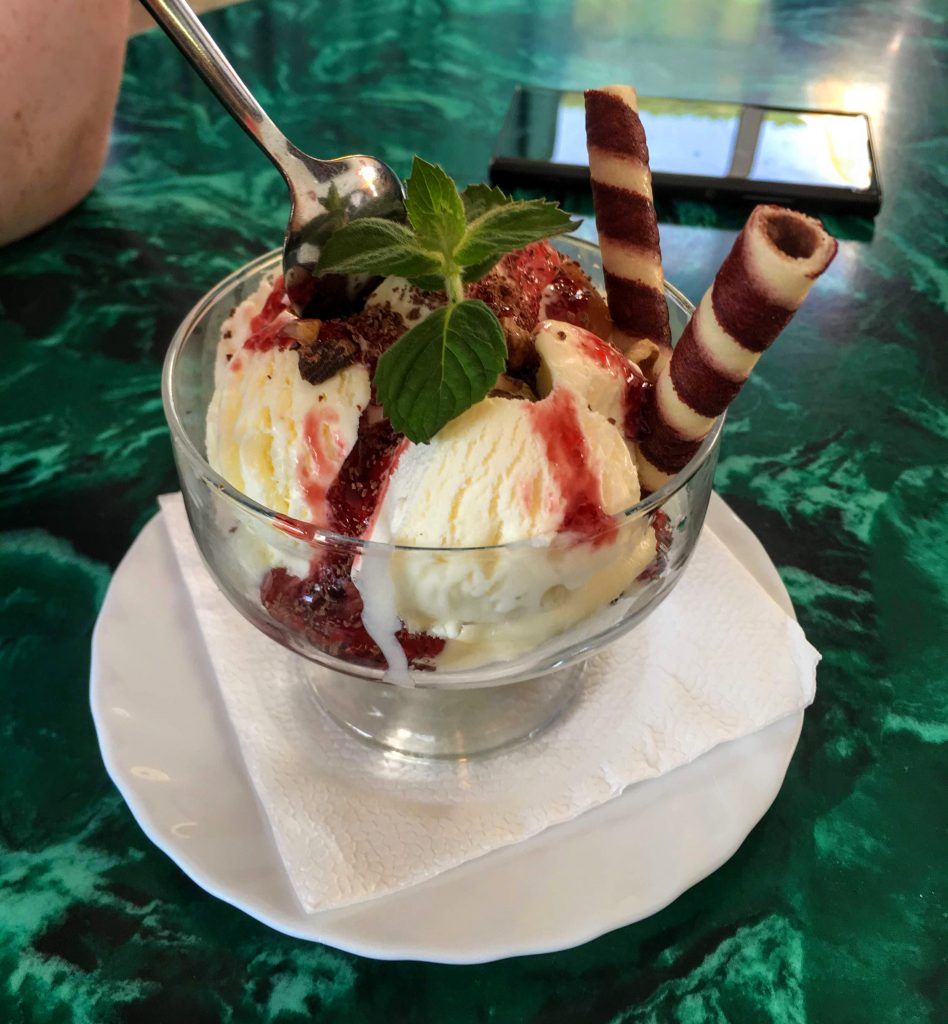 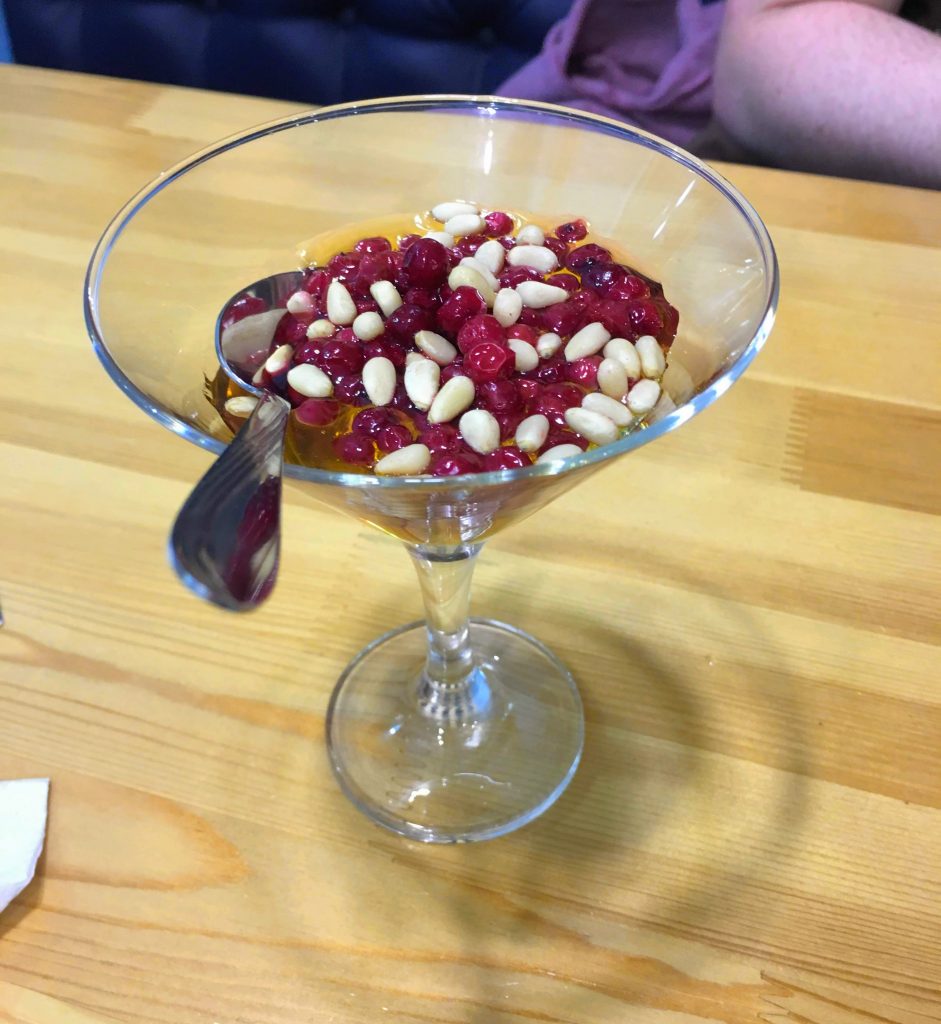 The dumpling is similar to Mongolian dumplings, but thankfully the one we tried wasn’t mutton (we got muttoned-out in Mongolia).

We recommend trying some of these foods at Baikal Love, a cafe that had good food for really good prices. It had English on the menu, so you actually know what you’re ordering and also pretty fast internet.

It’s not technically Irkutsk, but it is next door and being the gateway to Lake Baikal is what Irkutsk is famous for. Lake Baikal is the deepest lake in the world, the largest by volume and 2/3 of the 2000 species that live there don’t live elsewhere. That’s why Lake Baikal is known as the Galapagos of Russia. Visiting from Irkutsk is easy and both Listvyanka and Olkhorn are just a bus ride away. We’re not sure about bus times to Olkhorn but it takes roughly 6 hours to get there. Listvyanka, on the other hand, is only 1.5 hours away and buses (524 and 526) go there (from the Central Bus Station) starting from 8.30 AM and are roughly every hour. The last bus back from Listvyanka to Irkutsk is just after 6 PM.

The above were our recommendations based on our experience. If you know somewhere to visit, eat or stay in Irkutsk, you can add it in the comments.